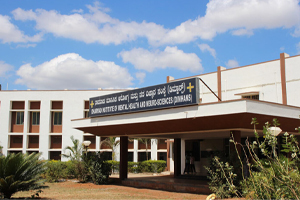 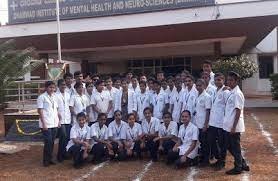 Institute was started as “Lunatic asylum” in 1845 by the British Government in the premises attached to the jail midst of the lush green vegetated 18 acres of land for keeping mentally ill who were discriminated against and stigmatized by restraining using chains and secluded from society and family members. Later in 1885, some rooms of the jail were used as wards for keeping patients. On 25 Sept 1908 Superintendent Engineer of Southern India wrote a letter to the superintendent of Bombay province to provide a place to establish mental asylum at Dharwad along with   Yerawad (Pune), Colaba, Ratnagiri, and Thana. Considering the cold climatic conditions of the region, the asylum was established in Dharwad during this period. From records available Collector’s office, Police Superintendent’s office, jail, and asylum were within a 1.5 km radius. In the year 1909, the asylum was separated from the jail and a wall around the asylum was constructed. The scientific basis of treatment using few available medications and psychological interventions was introduced. In the year 1922, British Government declared asylum as a “Government Mental Hospital”. Thus, this hospital is the second oldest hospital in south India.

After India’s Independence, the hospital was under the additional in-charge of the District Surgeon of Dharwad. In the year 1960, the separate hospital staff was recruited and Late Dr. S.M. Channabasavanna was appointed as the first medical superintendent of the hospital. He was the first psychiatrist to serve both as a specialist and superintendent from 1960-to 1963. During this period scientific methods of using Psychotropic and ECT were initiated. Outpatient services were started, more and more voluntary admissions were encouraged. During this time outpatient services at a Karnataka medical college hospital, Hubli was initiated. The Karnataka University, Dharwad recognized the hospital as a teaching hospital. MBBS undergraduates from Karnataka Medical College Hubli were posted for training in psychiatry. During the period from 1971-to 1974, OPD services that were maintained in the superintendent’s office were shifted to an independent OPD building. Later on from 1975 to 1977 services were developed in terms of gardening, carpentry, and utilizing the vacant land in the hospital premises for occupational therapy.

In the year 1979, the academic program, Diploma in Psychological Medicine was started in collaboration with the Department of Psychology of Karnataka University Dharwad. During the period 1980 to 1989, 17 postgraduates in Diploma in Psychological Medicine were trained during the tenure of Dr. M Venkataram as Medical superintendent. During this period rehabilitation of patients back to society was started. Emphasis was given to the categorization of patients who can be rehabilitated back home and treated on -Patient basis. Due to the state of in-built problems of shortage of trained manpower in the hospital, it received a setback in 1989 and 1990 the PG course was discontinued. In year1990 the occupational therapy unit “Centre for rehabilitation of Mental patients” (CROPM) was started by NGO under the chairmanship of Deputy Commissioner, Dharwad, one acre of hospital land was given for this purpose.